​Designed in the Middle Eastern Revival style by the prominent local architectural firm of Marye, Alger and Vinour, the "Fabulous Fox" Theater has been an entertainment magnet for Atlantans since its opening on Christmas Day, 1929... 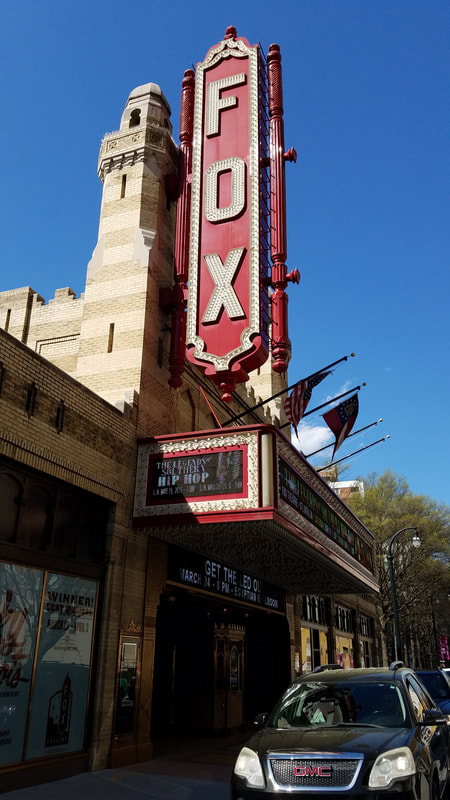 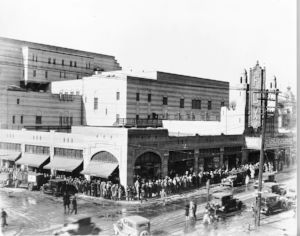 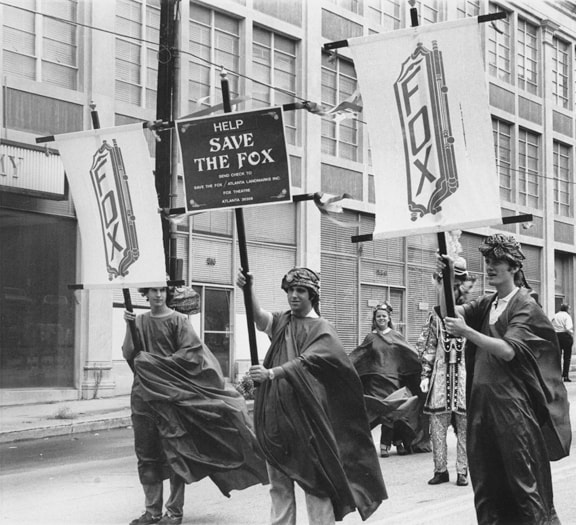 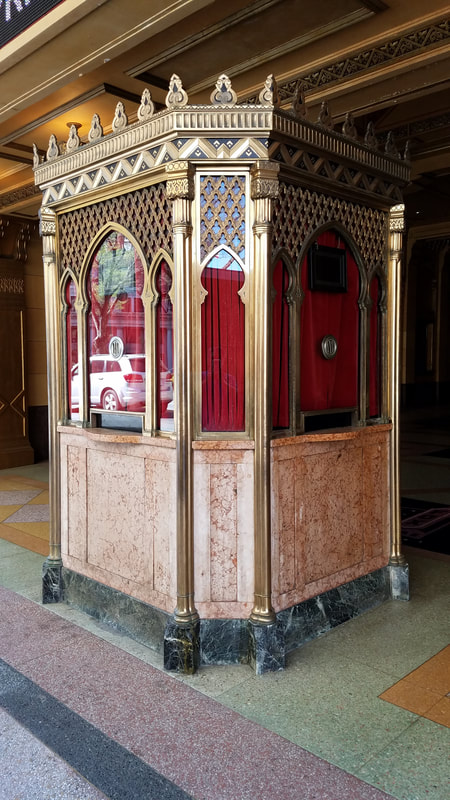 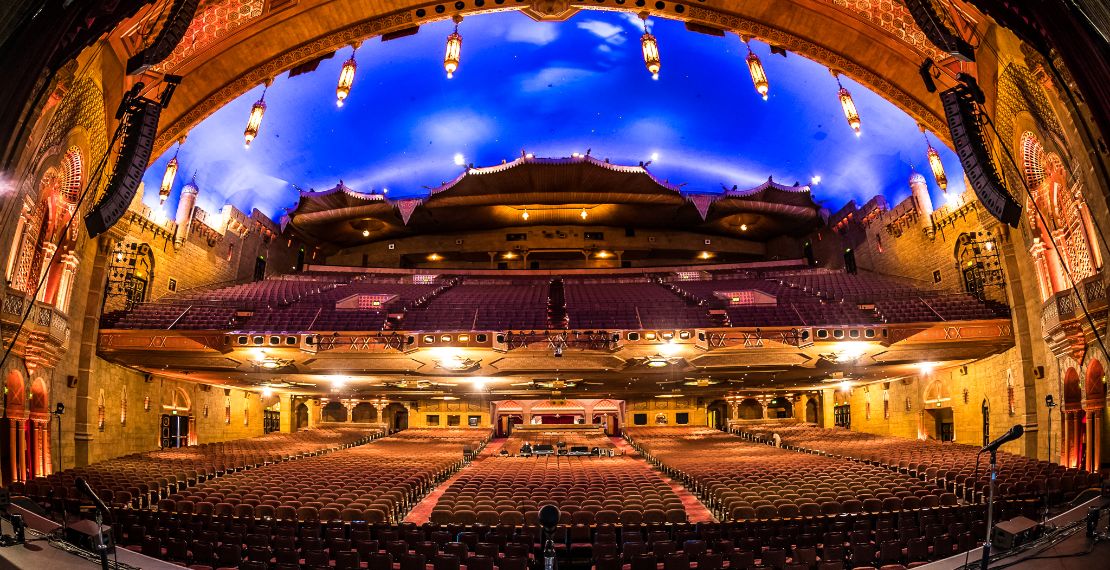 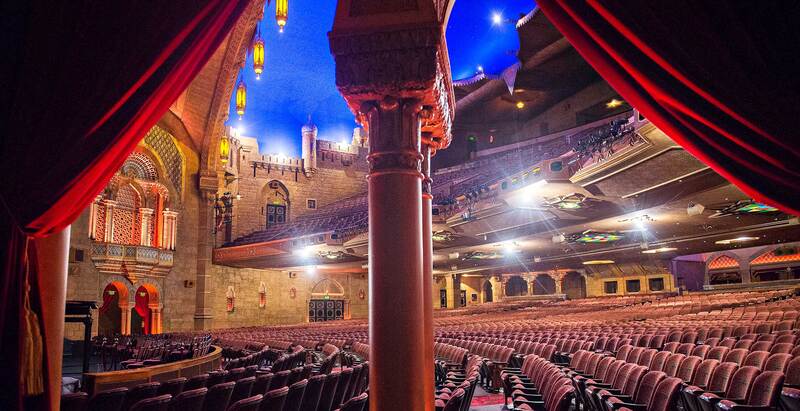 BRIEF HISTORY OF ATLANTA'S FOX THEATER
​In 1928, the Fox was originally conceived as a home for Atlanta’s Shriners organization. To create a headquarters befitting the group’s prominent social status, the Shriners looked to the ancient temples of the Far East to inspire a mosque-style structure befitting their stature. Storied architectural gems like the Alhambra in Spain and Egypt’s Temple of Kharnak heavily influenced the building’s elaborate and intensely ornate design. Bursting with soaring domes, minarets and sweeping archways, the exterior of the building gave way to stunning gold leaf details, sumptuous textiles and exquisite "trompe l’oeil" art (a technique that uses realistic imagery to create optical illusions) inside.

Shortly before its completion, the Shriners leased their beautiful auditorium to William Fox, a movie mogul who had launched his empire by building theaters across the country to meet America’s insatiable affection for the new moving pictures that were sweeping the nation. By the end of the 1920's, these aptly-named “movie palaces” were an integral part of nearly every community in the country, each one more gilded and exquisite than the next. Developers like Fox spared no expense, understanding all too well that these movie palaces were the gateway to a brave new world, transporting eager audiences to exotic, elegant settings they could only imagine.

With Fox’s financial backing (the project cost more than $3 million, the equivalent of nearly $40 million today), the 250,000 square foot Fox Theater was completed, with the crowning addition of “Mighty Mo”, the 3,622-pipe Möller organ that remains the largest Möller theater organ in the world even today. The Fox opened on Christmas Day in 1929 to a sold-out crowd, premiering Steamboat Willie, Disney’s first cartoon starring Mickey Mouse.

​By the late 1960's, beautiful landmark movie palaces like the Fox were falling out of favor, replaced by suburban movieplexes built for efficiency and multiple-screen showings. As customers began migrating to the suburbs, the Fox fell into disrepair, and in 1974, Mosque Inc. closed the Fox’s doors, seemingly forever. This stunning landmark, beloved for generations, was suddenly facing demolition. Confronted with the possibility of losing their beloved landmark, the residents of Atlanta sprang into action. They created a non-profit called Atlanta Landmarks and launched the now-legendary “Save The Fox” campaign, which raised funds through every possible means – collecting donations from both public and private organizations, organizing benefit concerts featuring everyone from Lynyrd Skynyrd to Liberace, even collecting pennies at local businesses, all to save the Fox from what seemed a certain fate.

Saving the Fox truly was a community achievement, a journey of a thousand small steps. Of the $3 million raised, no single donation was over $400,000; the vast majority of the fund was made up of small personal donations from Atlanta residents intent on rescuing this stunning structure. In 1975, after months of painstaking restoration efforts, the Fox opened its doors once again, to the joy and celebration of the patrons and employees who had pulled it from the brink of disaster.

See also: The Fox Story  + Fox Institute + Fox Theater Timeline
TIP: Stand across Peachtree Street from the Fox Theater and watch this 4-minute video. Better yet, watch it while enjoying a cup of coffee of your favorite beverage on the Livingston Restaurant & Bar's outdoor patio overlooking Peachtree Street!
Next Stop