Standing 17 stories high, the Candler Building, sheathed in snow-white Amicolola marble from north Georgia, is one of Atlanta's most luxurious high rise buildings. Its luxuriousness is well-exhibited on the exterior of the building, which in a manner typical of the era in which it was built, is divided into three distinct parts: a two-story base, a twelve-story shaft, and a three-story capital with large overhanging cornice.

The building was constructed between 1904 - 1906 by Coca Cola Magnate and former Atlanta Mayor Asa Griggs Candler. Built on property originally owned by the First Methodist Church, the site of the Candler Building was once the location of Atlanta's old Wesley Chapel, "a primitive structure of roughly hewn logs," the first public house of worship erected in the city. At the turn of the century, the lot was acquired by the Candler Investment Company. You will find more details about the Candler Building on the Interactive Map.

CANDLER HOTEL: In 2016, the building's owner entered into a licensing agreement with Hilton and in November of 2019 it re-opened as the Candler Hotel Atlanta. In the hotel's lobby, two-time James Beard Award-winning chef Hugh Acheson has opened By George, a French-inspired restaurant named after the building's architects, George E. Murphy and George Stewart.

FUN FACT: On May 1, 1889, Asa Candler published a full-page ad in The Atlanta Journal, proclaiming his wholesale and retail drug business as "sole proprietors of Coca-Cola ... Delicious. Refreshing. Exhilarating. Invigorating." Sole ownership (which Mr. Candler did not actually achieve until 1891) cost him a total of $2,300. [Source: Coca Cola Company] 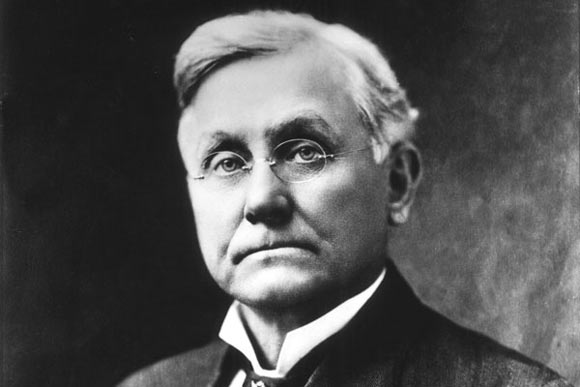 Asa Griggs Candler (December 30, 1851 – March 12, 1929) was an American business tycoon who purchased the Coca-Cola Company for $1,750 from chemist John Stith Pemberton in Atlanta, Georgia in 1892 and developed it as a major company. Prominent among civic leaders of Atlanta, Candler was elected and served as the 41st Mayor of the city, from 1916 to 1919. Candler Field, the site of the present-day Hartsfield-Jackson Atlanta International Airport, was named after him, as is Candler Park in Atlanta. As head of Coca-Cola, he built the Candler Building in Atlanta, as well as one in Kansas City (which became known as the Western Auto Building), a Candler Building (New York City), and one at what is now known as the Inner Harbor area of Baltimore, Maryland.
​In 2017, the Candler Building was featured in the opening scene of Baby Driver, a film that was described as (producer Edgar's Wright's) "High Octane Love letter to Atlanta." The movie's trailer below offers some excellent views of the building's exterior and a breathtaking car chase which follow's the 'heist.'
TIP: The best place  to watch this 6-minute video is on the NE corner of Peachtree Street and John Wesley Dobbs Avenue directly across from the main entrance to the Candler Building (in front of Georgia Pacific historic marker). Face the Candler Building, put your ear buds in and turn up the volume! This is the opening scene of "Baby Driver."
Button Text